And you have yourself a Bloody Mary!

Yes yes, some see a Bloody Mary and cringe at the idea. On the other hand, some people consider them a Sunday morning ritual, I personally think a Bloody Mary is a thing of beauty. As rich in history and creativity as it is in its red hues, and hopefully at the end of this post you’ll fall in love with its poetry as much as I do. So let the story begin! Once upon a time…

It all started back when something terrible happened in the US of A, prohibition, or as W.C. Fields likes to put it, a time where he “was forced to live for days on nothing but food and water”. Bartenders had decided to flee to the safe shores of Europe to continue their practise, the same time a pretty nasty revolution convinced groups of Russians to do the same – bringing their Vodka with them. Americans didn’t come empty handed however, they brought tinned juices. (If it was a competition….)

Nonetheless! This, right time at the right place was the birth place of something beautiful. It was 1920s Paris, a bartender by the name of Ferdinand “Pete” Petiot and a bar by the name of Harry’s New York Bar on 5 Rue Danou (or as liquor hungry americans learnt to instruct parisian tax drivers, “Sank Roo Doe Noo!”). This is where the history gets a bit blurry, there are many variations of the story, but long story short – the Bloody Mary or very early days the “Bucket of Blood” was created. Some say the Bloody Mary comes from Queen Mary I, known for the death and destruction she caused over her reign, also sharing the same nickname.

At the start it was just equal parts vodka and canned tomato juice, but as time passed, Pete moved back to New York to man the King Cole bar at the St. Regis and a Russian Prince and businessman by the name of Serge Obolensky wanted one of the infamous Bloody Marys, but with a kick. And this! My friends, is where we get the tasty concoction today. He put on his thinking cap, grabbed the salt, pepper, Worcestershire sauce and a lemon, and the blank canvas was promoted to masterpiece.

The story continues with its many variations, The Red Snapper it gin laden cousin, or its Mexican friend the Bloody Maria, but these are all interesting stories for another day.

The beauty of the Bloody Mary is that there is no true recipe, and its a classic which the most stubborn mixoligist will allow others to play around with. These days we see the likes of sriracha among many other ingredients being added. Its something of ones own culinary skill and these days Bloody Marys aren’t just drinks – but also foundations for lavish garnishes which really show the true potential of wooden skewers and a creative mind.

Hopefully I’ve helped open up the minds of some anti-Bloody Mary folk out there, it may be an acquired taste, but it truly is one for the books. So with that said! A few locals to have a look at: 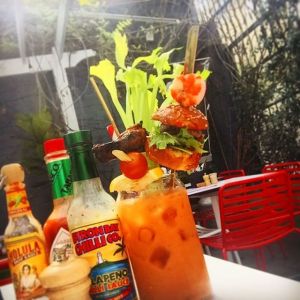 The Bloody Mary @ Porch and Parlour, also at Sydney. Bondi in fact, who needs garnishes when you have a view?

The Secret Bloody Mary @ Stray Neighbour, Preston. Garnished with Fried Pickles & Chipotle aioli – this one was limited edition but I’m sure we can create a petition…

For those playing at home: